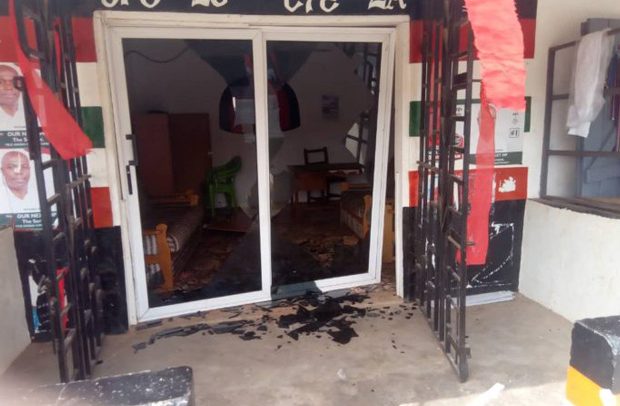 THE Yilo-Krobo Constituency Office of the Opposition National Democratic Congress (NDC) in the Eastern Region has been declared as a ‘crime scene’ by the police following an incident of vandalism over the weekend.

Officers from Somanya Police Command are now providing 24-hour guard duties on the premises of the office.

A group of irate party supporters vandalized the office at Somanya and in the process destroyed computers, sliding glass doors, cardboard and some documents at the office.

Besides, they took away an undisclosed amount of cash and other valuable items from the office.

The incident happened a few hours to a balloting exercise which was expected to be conducted by the constituency election committee for the candidates contesting in the parliamentary primaries which had been characterized by suspicious attempts to disqualify one of the candidates, Albert Nyakotey Tetteh.

Three candidates, namely Michael Ologo believed to be the ally of NDC Chairman, Ofosu-Ampofo, a former MCE, Andrews Soda, and Albert Nyakotey Tetteh, who was initially disqualified and later reinstated by the party’s Conflict Resolution Committee, are vying to take over from incumbent NDC Member of Parliament (MP), Magnus Kofi Amoatey, who is not contesting again.

DAILY GUIDE sources say the violence was instigated by supporters of Ologo who see Nyakotey Tetteh as a threat following his reinstatement.

The Somanya District Commander, DSP Isaac Otsin, upon hearing the incident, brought police officers to the office but the irate NDC supporters had fled the scene.

Later, one of the gang leaders was arrested by the Somanya Police Command and is currently in custody assisting in investigation but the police have not released his name.

The Constituency Chairman, Narh Agbo, confirmed on radio that due to the incident, the balloting exercise had been suspended.

Hundreds of party supporters and branch executives in the constituency threatened to resign should the party disqualify Nyakotey Tetteh from the contest.

When the party opened nomination for the primaries, the National Chairman of NDC, Ofosu-Ampofo, was accused of being the mastermind behind the machinations to disqualify Nyakotey Tetteh, to enable Michael Ologo, who manages Ofosu-Ampofo’s media houses, including Ahotor FM in Accra and Radio One at Bunso Junction in the Eastern Region, to sail through.

After the incident, the incumbent MP, Mr. Amoatey, visited the party office to assess the damage caused by the party members.

COVID-19: Address To The Nation By President Akufo-Addo On Updates To Ghana’s Enhanced Response To The Coronavirus Pandemic

HOT AUDIO: “I CHOSE FREE ZONES, THE PRESIDENT DIDN’T GIVE IT...

ABOUT US
RadjTV is a Ghanaian owned leading online TV channel focused on serving nothing but the truth to our readers and viewers. RadjTv relies heavily on a team of dedicated news professionals. We bring you the latest in relevant human interest, culture and entertainment news from the front lines, featuring riveting and exciting contents by using the latest multimedia technologies, from live video streaming to audio packages to searchable archives of news features and background information. RadjTV.com is updated continuously throughout the day. Contact us: info@radjtv.com
Contact us: info@radjtv.com
FOLLOW US
© © All Rights Reserved - RadjTV - 2019